Welp, that’s it! The yoga inbox is cleaned out, the last satirical bits have been written and published, the mat is rolled up, the yoga studio is now an art studio and YogaDawg is quitting snarky yoga blogging to concentrate on his painting (Eight years ago I laid my brushes down and I vow never again. I declare once and for all, I am an ARTIST!). Perhaps this will be picked back up sometime in the future. In the meantime, thanks to all you beautiful yogis who took the time to visit and who shared a laugh. You can always go to My Third Eye Itches to find all the original YogaDawg material from over the years.
I do want to leave you with my very first piece of writing that happens to be about my first yoga class which was written before YogaDawg was even YogaDawg. The yoga world was wide open for me then and I am convinced that it had somehow brought me back to my art.

Always my best to you,
YogaDawg

During a particularly bleak winter, I took a yoga class. Actually, the yoga class took me as I woke up one morning with the thought, “do yoga…”. Where did that come from? What an absurd thought. After all, just the word yoga sounded goofy to me.

With curiosity, I googled ‘yoga’ and saw that there was a studio in a part of the city where I was sure I wouldn’t run into anyone I knew. I was thinking that this could promise to be a complete embarrassment to me or just another hare-brained idea of mine so I knew that doing yoga would best be done in complete anonymity.

Saturday morning, the day of the class, I drove downtown, where the studio was located. It would have been a pleasant morning drive if wasn’t for the crazed dialog that was running in my head. After all, I did feel a little stupid doing this. A gym might have been a bit more explainable, but machines and sweat (yogis don’t sweat, right?) never appealed to me.

”Yoga? You’re going to do Yoga???”
“Yeah, I’m going to do yoga, I think I need to do this”.
“You are going to make a fool out of yourself”.
“Probably, but no one knows me there and I can get drunk afterwards”…
”I don’t know, this is going to end up bad somehow…”
“Yea, you’re probably right, maybe I should turn around at the next exit!”

Somehow I made it to the yoga studio and was a bit surprised that I didn’t throw myself out of the car on the way down. As the studio was on the second floor, I made my way up the stairs to the studio door as I concurred with my other half, “Okay, this is stupid…”. Turning to leave, I heard the door open downstairs as a student walked in. The ego being a fragile thing, I knew that going into the studio would be easier than being seen fleeing with some lame excuse (“I thought this was the Starbucks, hee, hee, hee…”).

I entered the studio feeling silly and uptight. The instructor greeted me, said her name is Susie and walked me through the signup process. Not knowing what a yoga teacher should look like, I would have not be surprised if she looked like Maharishi Mahesh Yogi. She didn’t and was welcoming and smiling. Susie explains to me what we are going to do…”…a little yoga (okay), a little Tai-Chi (whatever) and learn a little Sanskrit” (Oh man, she’s going to recite the Bhagavad-Gita in the original language….). I don’t know nothing from yoga and I am definitely lost here. She tells me to grab a mat and take a seat.

Susie starts the class and has us close our eyes (…perfect… lights out…shields down!) and instructs us to circle our heads and shoulders around and do something she calls the ‘cat/cow’ pose. With a smidgen of confidence, we begin a series of poses that proved just how unprepared I was for all this. Some of the poses have English names but the others were all unpronounceable to me except for one that sounds like Chimichanga (Note to self: stop by a Mexican restaurant on the way back home).
I’m clueless as to what I am supposed to be doing. This stuff goes on forever, repeats over and over and I’m completely out of sync from looking up and around to see what everyone else is doing. I’m lost, can’t keep up, I’m dripping sweat, I’m weak and woozy, I’m hating this, want to stop, but most of all, I want a beer because I can’t take it anymore. Susie mentions, “ …and when you need to rest, go into child’s pose…” (does she see me going down for the final count?) . I flop down on my knees, face on the mat and as soon as I do, I recoil because now I realize that this mat had been yogied around the block a few times too many and was not smelling too good; kind of like an old gym sock. “This is crazy”, I think as I bolt back up and stagger through the poses for the next several repetitions.

We eventually go into a Karate Kid thing, you know, hands up like talons, standing on one leg, the other raised and bent (and I’m trying to stand on one leg, wobbling while raising and lowering my arms like some demented bird). I’m more then a bit stunned when I realize that everyone can do this except me.

Though the rest of the class was a blur, I do recall at the close blissfully lying on my back, eyes closed and grateful that all this was about to end. I talked to Susie after the class, trying to make a graceful exit; her encouraging me to take another class; me answering her but only thinking, “Flee, flee now, get out of there and back home”. And I did, thinking this was the stupidest thing that I had done in a long time. Oddly though, I woke up the next day feeling unusually ‘light’, but with some unusual aches and pains. After too many years of leading a sedentary life, I liked all those aches and pains; as if my ‘being’ was glad that I had made an effort to finally get up and start moving again. I was convinced there was something good to be had from this thing called yoga.

Over the next couple of months, I took a lot of beginner and ‘Into to Yoga’ classes with other studios in the area. Who would have thought that a yogi would need to learn how to sit (Sukasana), how to stand (Tadasana) and even how to lie down (Savasana)! I met some great teachers during this time and was thankful for their encouragement. I was also grateful to have found something that seemed to prevent me from slipping further into that winter’s funk.

I have now approached the first year anniversary of my yoga practice. Within that year, I came to take some comfort when I was faced with things like my daughter’s teenage angst, or recognized my own mortality when I saw how feeble my parents had become or when I sensed another environmental disaster or monetary meltdown always lurking around the next corner or when I heard of another kid shot dead in the District, I knew that at least for a hour or so during a class, I would forget about all that and the other negative life-stuff swirling around me…and how amazing is that!

I questioned myself a lot during that first year with what I could possibly be taking with me from this practice when I was off the mat. I wasn’t sure outside the obvious; a little more balance, a little more strength, a little more flexibility and perhaps a bit of self humor when I find myself laughing as I try to get into all those ridiculous poses. But I know now, when I find myself in yet another stressed out and screwed up situation, I would occasionally hear the collective voices of my teachers saying, as they always do when we are doing all those seemingly impossible twists, bends and binds, “… now breathe…”. And I sometimes remember to do just that, and it makes me a little calmer, if only for a moment or two, which sometimes is just enough. So perhaps that is the best thing that I take from this yoga practice; to simply breathe!

Looking forward I hope that sometime during my next yoga year, I will find myself in that old Karate Kid pose flapping my arms like a “great blue heron flying over the Potomac” and breathing more aware than ever! 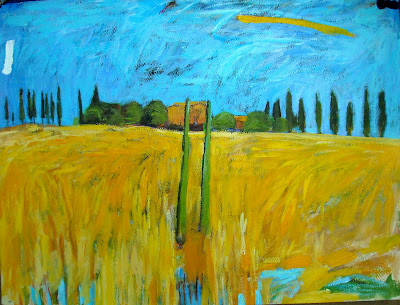 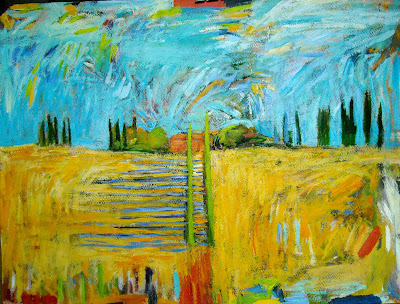 YogaDawg aka Art Trip painting and thinking of bits for his new satirical art website and snarky art blog
Posted by Yogadawg at 12:02 AM