I can't believe it's not Buddha 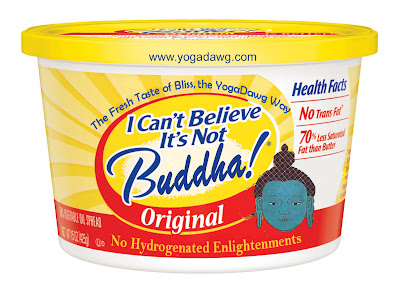 Be aware that like the Yin and the Yang, the Alpha and the Omega, there are also polar opposites with people practicing in the Yoga Scene.  They are affectionately known as the Yip and the Yog.  Simply put, the Yip is the yogically hip; the purveyor of the cool, tight and trendy pimp chic look of contemporary yoga.  Fed by the Yoga Industrial Marketing and Merchandising Complex (YIMMCo), these yogis have evolved the simple needs of yoga into an alt-yogic lifestyle.  Too hip to read yoga magazines (though they tend to sneak peeks from time to time to verify how ahead of the yoga curve they are) they seek out their too cool and post-mod ideas on Buddhist web sites.

The Yog on the other hand is “not”.  They, most likely, are beginner yogis that have not been tainted by the YIMMCo as of yet.  In certain urban yoga studios, the Yog will be made to feel unwelcome and may even be discouraged from pursuing Yoga.  They may, however, be given the advice to check out the Yoga Fashion page of the YogaDawg website before going back to a yoga class.

To help guide you on your path to Yoga Yipness, the following is a handy guide to refer to when confronted with choices in the Yoga World.

YIP – YogaDawg Gear or anything designed by independent, gay yoga clothes designers living in the East Village of NYC or in a pince, Lululemon.

YIP - Mala (worn on wrist), Co-exist or Free Tibet bumper sticker on Prius, top shelf Kombucha, has the smell of Dr. Bronner’s and essential oils, altar (sacred space) on dashboard, Tibetan prayer flag in home studio, a year pass to a trendy and expensive yoga studio, Sanskrit name such as Shanti or Shakti, lives in  LA or NYC

YOG – A rosary worn around neck, My Other Car Is A Yoga Mat bumper sticker on SUV, water in an eco friendly, reusable water bottle, vision boards, has the smell of sage incense, feathers or dream catcher hanging from rearview mirror (or hanging from their ears), DVDs from current yoga stars, normal name such as Brad or Buffy, lives somewhere other then LA or NYC.

YIP - Buddhist, Taoist, Hindu symbols or any symbols from an obscure Eastern based religion.

YOG – Om symbol or anything other then the above or worse, none at all.

YIP – The Yoga Sutras of Patanjali, Light on Yoga, and Yoga Enquirer.

YOG – Anything by Deepak Chopra, Eckhart Tolle, and Yoga Journal.

YOG – Other then above

Special Note: Yips can morph into YogaDawgs after the age of thirty-two. Though not considered as hip as a Yip, YogaDawgs are still quite respected in the Yip community.

Special Note 2: YogaDawgs will continue to maintain this designation and respect from the Yip community as long as they refrain from any of the following:

1. Moves to the suburbs
2. Works in an office
3. Works as an accountant, engineer, programmer or salesperson
4. Lives with a partner that does one of the above 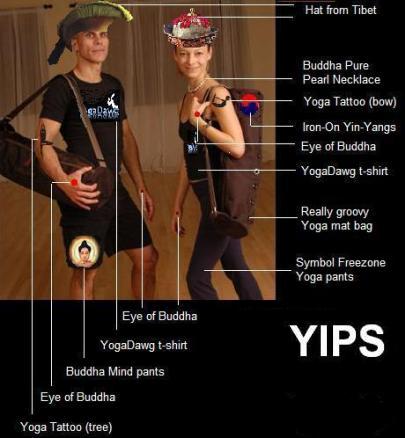 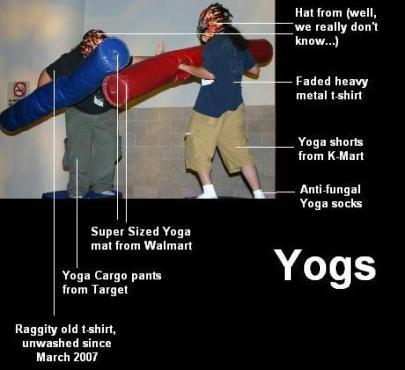 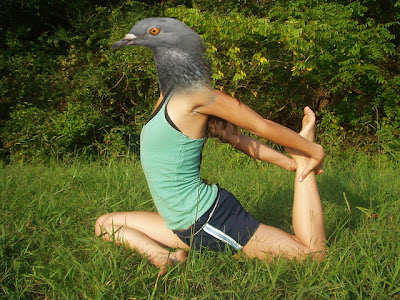 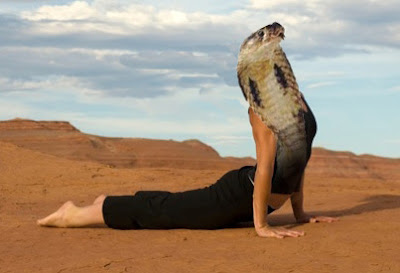 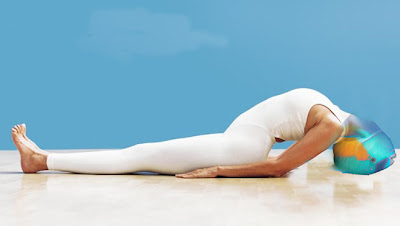 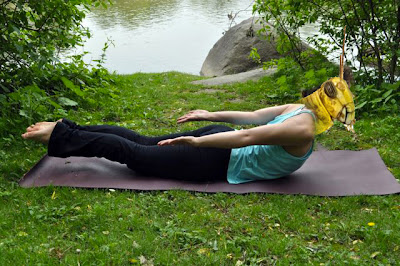 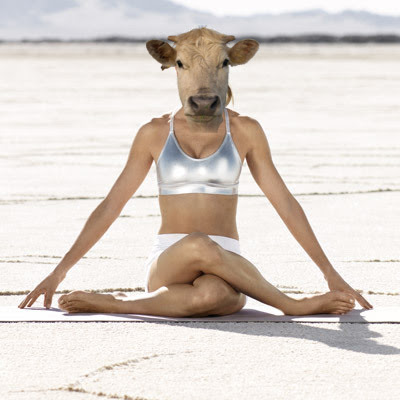 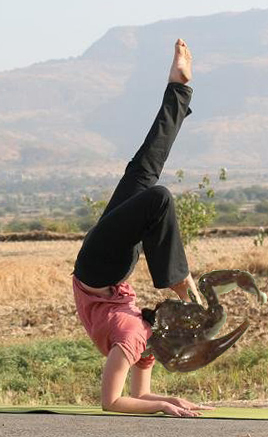 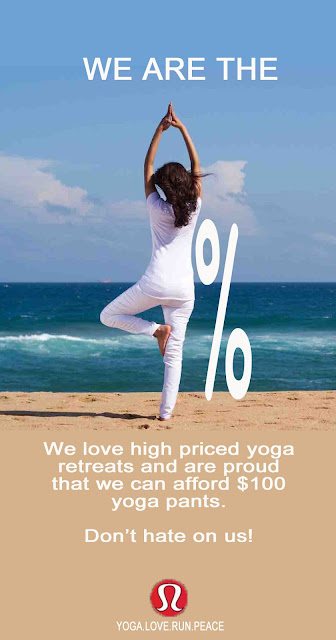 Vancouver — In a leaked memo to the board of directors of Lululemon, high ranking employees expressed concerned about an advertising campaign that was about to be launched by Chip Wilson just before he was ousted from the CEO position of the company.

The memo cites that the CEO had been acting “erratic”, citing several employees who claimed that they saw Mr. Wilson sitting naked in a lotus position on piles $100 Canadian bills in middle of his office while chugging bottles of premium kombucha.

Attached to the memo where several graphics that the former CEO had designed and was about to release in a new marketing campaign.  Besides two full color ads showing Lululemon buyers as being part of the “one percent” and another one showing Mr. Wilson proclaiming, “I laughed all the way to the bank”, the most curious was one showing a Lululemon bag with the slogan, “I am a yoga douchebag” emblazed on it.

The memo concluded that, “Even though this is a damn clever campaign, we can’t risk alienating any more yoga bloggers”, in apparent reference to the firestorm that erupted last year after Lululemon branded the slogan, “Who is John Galt”, on its bags. 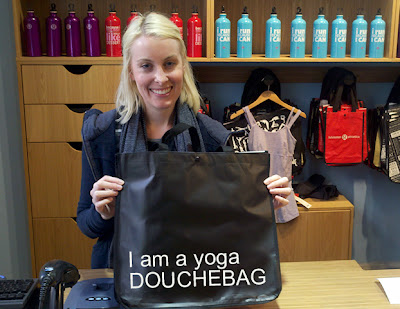 Note:  As of March 2011, Wilson's estimated net worth was $1.9 billion with organization revenues of $700 million. Wilson is linked to the big-ticket Point Grey mansion--worth $37.2--million--currently the most valuable home in Vancouver.  In an interview with the former CEO for this story, Mr. Wilson said his only regret as head of Lululemon was not being able to launch this campaign because he really wanted to let his customers and the public know what he really thought about them.
Posted by Yogadawg at 4:37 AM 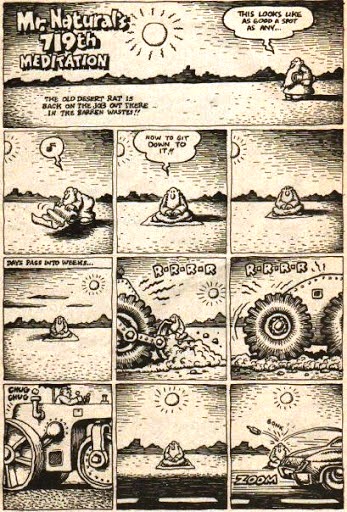 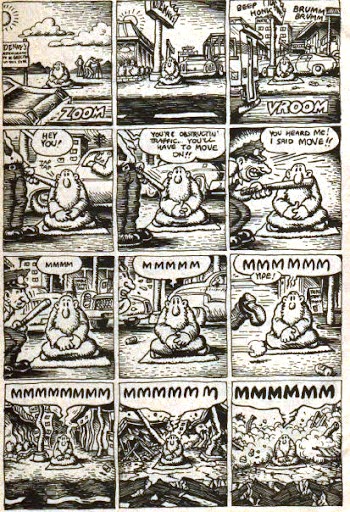 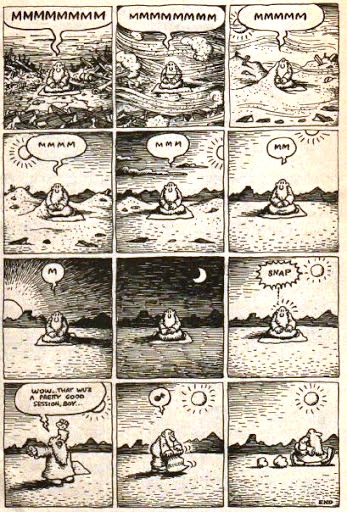 Is this your Unicorn? 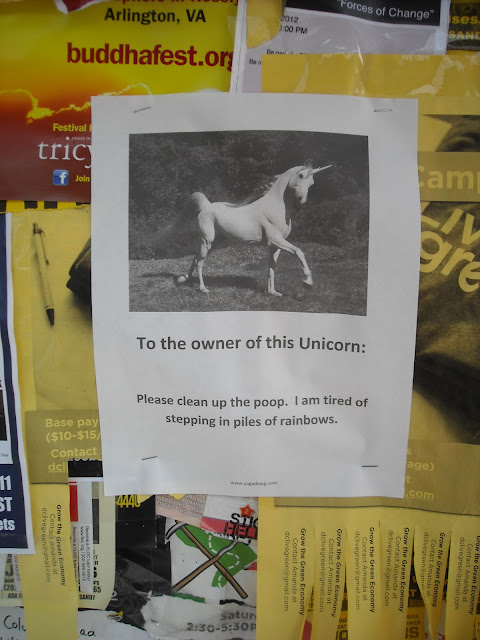 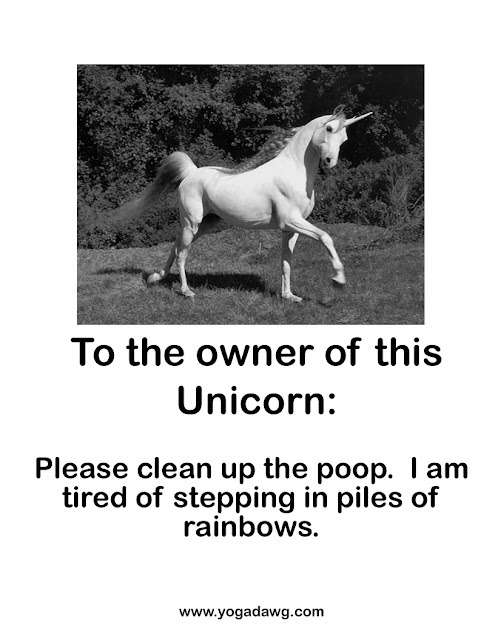