Men will be able to get a fresh perspective on the Yoga world around them this month thanks to the nationwide launch of YQ, an exciting new magazine which aims to bring the male perspective to Yoga.

Covering everything from Yoga fashion to Yoga flirting, Yoga music to Yoga studios with its own unique stance, this picture-led publication will transform the way men think about Yoga. Articles in the premiere issue include:

It will be edited by YogaDawg who commented, "At last there is an alternative to that fem Yoga rag, Yoga Journal. Now men won't have to request a plain brown wrapper when buying their Yoga magazine through the mail or at a Yoga studio. We are getting lots of positive feedback from both male Yoga students and male Yoga Stars on the magazine." 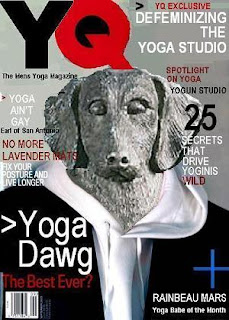 As a Yoga studio owner, the Yoga studio shop is where you will want to lavish the most attention and care. This will be your perennial money maker, so always think bigger is better. As a general rule, you will want to make this the largest space in the studio. You will also want to locate it right by the front door so as not to be missed by your students as they enter the studio for their classes.

Ideally though, to maximize your Yoga profits, you will want to have the Yoga shop occupy at least half the size of the studio. You will then strategically place the receptionist desk right in the middle of it with Yoga merchandise overflowing from shelves and displays placed all around it. This will allow your students to do some much needed Yoga shopping before (and after) their Yoga class. Always design your studio and shop so that the student will be forced to make their way through it before they go to their classes.
Posted by Yogadawg at 2:52 AM

As you continue your journey as a Yogi, you will begin to seek out interesting and enlightened Yoga studios. The location of these Yoga studios will most likely be in a neighborhood that was once blighted and shunned by the good citizens of the city. Where drug dealers and thugs ran amok, the area is now swarming with Yuppies, BoBos (Bourgeois Bohemians) and Yogis with their brightly colored Yoga mats. The purifying effect of the Yoga scene and Yoga itself has the power to run even the most hardened criminal out of the area. The progression of an area of hell to Yoga Heaven happens in the following way:
Posted by Yogadawg at 10:37 AM

Yoga studios are established on every other block (usually next to the Starbucks). The artists move out because they can no longer afford to live here. Condos will be built with a minimum price of $500,000 per unit.

YogaDawg will now guide you through Yoga Nidra. If you have trouble sleeping, please refer to the video below (Don't laugh, this is serious stuff).