Yoga News - SF to Yoga – Turn down the Heat

In one of the more extreme responses to the global warming crisis, practicing Yoga in a “hot” studio may be relegated to history's dust bin in San Francisco if that city gets its way. The Mayor’s office sent out notices today requesting all “hot” Yoga studios in San Francisco to refrain from unnecessarily heating their studios. “We hope they (Yoga studios) will turn down the heat voluntarily before a complete ban on excessive heat in their studios goes into effect”, Mayor Newsom said while signing the notice.

The San Francisco Board of Supervisors is proposing a prohibition on any Yoga studio that’s get hotter then 72 degrees. The proposed ban would take effect next year. Ross Mirkarimi, a member of the Board of Supervisor told the SF Chronicle newspaper that ``yoga studios designed to pump out excessive heat is a complete waste of energy and causes too much CO2 thus is a direct factor in global warming. This is unacceptable behavior in our enlightened city. If they can’t get sweaty enough during their Yoga practice without turning up the heat in the studio, then they need to take up something else, like volley-ball perhaps”.

For those who abhor Yoga as a vulgar display of affluence (along with yoga conferences, yoga clothing and yoga jewelry), such a ban could be a two-fer: Saving the planet while thumbing their nose at economic inequality. The folks against “hot” Yoga in SF often are same ones who hate McMansion-sized homes, corporate jets, jumbo freezers, yachts, 60-inch flat-screens TVs, overnight-delivery services and other trappings of Western-style wealth and energy use.

But according to some distracters, the debate isn't just about how much carbon dioxide “hot” Yoga is pumping into the atmosphere. Owners of “hot” yoga studios believe that this is really about the disdain that other schools of Yoga hold for this style of Yoga. “It wouldn’t surprise me if some members of the Board of Supervisors are doing that wimpy Anusara crap”, remarked Karmaelectra of Hot Tamali Yoga in Beacon Hill.

Reaction was swift and to the point from the targeted studios upon hearing about the ban. Shanti Bliss, owner of the Hot Dog Yoga studio, exclaimed, “This burns me up”, while Durk of Hot and Heavy Yoga said, “If they (Board of Supervisors) can't stand the heat then they need to get out of the kitchen”. When Sri Paris of That’s Hot Yoga in LA was asked if she was concerned that a similar ban might be proposed in LA, she simply remarked, “That mayor’s hot”. 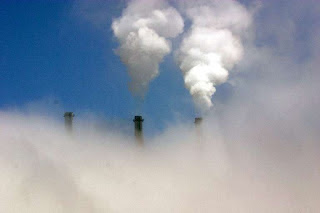 The interior design of this type of studio is a drug-induced, psychotic, psychedelic nightmare that will pound your retina and brain into submission. Upon entering, you will find your field of vision becoming overwhelmed as you are assaulted by the jumbled, visual cacophony. You will close your eyes a lot in a studio like this simply to provide a safe haven your eyes. When you are able to peek around, you will find all manners of mandalas, Tibetan art works, day-glow posters of Ravi Shakar, funky hand painted peace signs, paisley wall hangings and tie-dyed statues of Buddha, Shakti and Jimi Hendrix. You might see Tibetan prayer flags hanging up above along with Love and Mardi Gras beads. Expect to find a gong and even bong in a corner of the studio. Perhaps you will even see Cockatoos flying around along with a pair of trapezes artists swinging above.

The Purple Haze studio always follows a very predictable evolution. Having been established during the 1960s as a Head Shop, it morphed into a meditation temple as the owners were busted for Pot or subversive left-wing activity and then a Yoga studio to cash into the Yoga craze.
Posted by Yogadawg at 4:03 AM

The Eco Haven follows the guidelines set forth in the EcoYoga Association’s guide to ‘green’, ecologically sound and sustainable resource Yoga studios. The construction of the walls will be made from straw-bales and compressed corn-cobs making it smell a little like a barn. It will have a roof planted with soybeans or alfalfa. It will utilize passive solar design and may be dug into the south side of a tenement or condo building. The studio will feature rain water collection barrels on the roof, integrated wastewater treatment for the sink and toilets, photovoltaic electrical systems, solar hot water heaters, passive solar heating and a bio-climatic eco-cycle system. There also be sweat reclamation devices along with idle, inner chatter channelers and a Negative Vibes Converter.

The Eco Haven will be proud to offer a variety of eco-safe products in the studio store that the Eco Haven has branded with its own studio logo. You will find the new and exciting EcoHaven Yoga Mat whose innovated design is fashioned from the floor debris collected in the studio. It consists of lint, mat droppings and assorted hairs and dead skin from the Yogis practicing there. These are mixed with the recycled bit of unclaimed mats left in the studio. Remember that we must all do our part for a sustainable future of Yoga.

These studios will usually be arranged in a Feng Shui fashion. Otherwise, it will aligned to the either the cardinal points of the Great Pyramid in Giza, the equinox head stone at Stonehenge, the sacrificial alter in the Jaguar Temple at Chichén Itzá or the apex of the orbit of the ex-planet Pluto.
Posted by Yogadawg at 3:48 PM

This is a frilly variant of the I Have A Dream style of studio interior design. Do not confuse it with the Purple Haze style. Though the names might be similar, they are of a completely different aesthetic. Whereas the Purple Haze seems stuck in a time warp, the Lavender Haze is stuck in an age warp; the age of about 12.

The color 'Lavender' (other studios of this type may use colors like 'Bubble Gum', 'Rose Puff', 'Teeny Bopper Blush' or 'Baby's Bottom') will be everywhere in the studio. There will be lavender walls, lavender floors, lavender mats with the teachers and even the students wearing lavender colored clothes. The front desk and the computer will be lavender and when they manage to use another color, say green for example, it will look like lavender. You will notice soft pillows and furry stuffed animals in the shape of elephants, Brahma bulls and water buffalos. Also you will notice the cute, furry lavender colored, stuffed Buddhas.

You will always know when you are approaching a Lavender Haze because there will be a lavender glow emanating from the studio as you approach it from down the block.

TIP: Men - There is a tendency for males to become severely nauseous when practicing in a Lavender Haze. Remember that what doesn't kill you only makes you stronger.

TIP: Women - It is suggested that you bring a mat that is of a different color than lavender as there is a tendency to lose it as it blends into the lavender haze.
Posted by Yogadawg at 10:29 PM

Yoga Studios - The Leave Me the Hell Alone

Mysteries abound around this type of studio as it is a great mystery what goes on in it and what it looks like inside. There might be some grainy and out of focus photos of the studio on it’s website and the only way that you really know that it is a Yoga studio is because the website said it is. The site will list an address and some vague indication that they offer Yoga classes. If you actually go to a Leave Me the Hell Alone type of studio, you will find the door locked. You will feel like an idiot by following the suggestion of the sign on the door to “Knock hard’ while no one opens the door.

Any Yogis that stumbles on one of these studios and by chance, someone actually opens the door, please email YogaDawg so this web site will at last have a description of what it looks like inside.
Posted by Yogadawg at 4:17 AM