Amy Beniker
For The Yoga Economist

WASHINGTON - With stocks gyrating wildly, panic in the housing market and talk of recession, concern is being voiced among the presidential candidates about rescue plans for the American people. What is little known is the concern among Yoga studio owners of plunging class attendance and short falls in the sales of Yoga props. With Yoga students mortgaged to the hilt, threatened by joblessness and having used their high end condos as ATM machines during the real estate boom of the last few years, these Yogi BoBos have suddenly found that the extravagance prices of yoga classes are no longer viable and have been abandoning studios in droves.

A group of studio owners and yoga stars has formed a coalition to petition the government for an economic stimulus package for Yoga studios. They have chosen Dennis Kucinich, former Democratic presidential candidate to lead this coalition. Even though he has dropped out of the presidential contest due to lack of interest among voters (outside of a contingent of disgruntled, sexually frustrated old fogies in Florida due to his campaign slogan of, "I'm old, I’m short, but I get the babes.", in apparent reference to his tall, young, smokin' hot wife), the coalition, nonetheless, felt that Mr. Kucinich would be the perfect candidate to present their demands to congress.

What is little known to the general public is the fact that Mr. Kucinich is a practitioner of Agni Yoga. "He is one of our own", remarked Jeani-ji, owner of Yikes Yoga in LA. With election-year calls to establish a cabinet level Department of Yoga (to capture the "Yoga Mom" votes), the coalition feels that Mr. Kucinich is the ideal person to push a proposal to get rebates for yogis who purchase bulk class passes of 10 or more. "This should help jump start the faltering Yoga economy", Jeani-ji said. "We are also proposing a so-called bonus depreciation to allow yoga studio to deduct 50 percent of business investments made this year as well as generous write-offs on yoga props and paraphernalia."

Several of the presidential candidates, both Democratic and Republican, rolled their eyes when informed of the proposal that Mr. Kucinich was pushing. Sen. John McCain, meanwhile, remarked, "And I thought Ron Paul was nuts!" 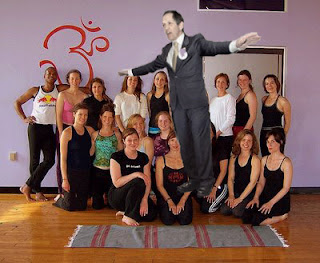 DECHU, India – Material girl Madonna has become the center of yet another controversy as she allegedly requested an entire Indian village to be vacated in order for her to practice Yoga. The pop singer and her British filmmaker husband Guy Ritchie spent New Year's Eve in the ShaktiYogi Hotel in Dechu village in the northern Indian desert state of Rajasthan. It appears around midnight; she decided that she wanted to do some Yoga.

Deepankar Tamil, the front desk clerk for the hotel, said that Madonna called to request that the hotel be cleared of guests so she could begin her yoga practice. "I thought this was a bit strange, but when she requested that, in addition to the hotel, she wanted the whole village to be cleared, I wondered if she was perhaps smoking some ganga", Mr. Tamil explained. "Thinking that she was perhaps pulling my leg and having a good joke on me, I asked if she also wanted the cows removed. Well, at that, she started speaking in a voice that sounded like a cross between Maharishi Mahesh Yogi and Pat Robertson. It was really spooky," Mr. Tamil added.

This is not the first time that Madge requested that people be vacated around her so she could do Yoga. A few weeks ago, the 49-year-old singer was told to stop talking by an instructor at a sports club yoga class. According to the New York Post, this prompted the unimpressed star to shout out, "I want you all to leave!" All 25 students and the teacher abandoned the studio.

Even though it is not clear how many people actually vacated the village, there are some reports of sadhus disappearing. Whether this is due to Madonna's request or advanced siddis that they practice remains unclear.

When the Minister of Information for India, Raj Kulatunga, was told of the incident, he replied, "Well, I hope she doesn’t decide to do Yoga in Bombay. I don't know where we would move all the people."

Indian village before and after Madonna does Yoga 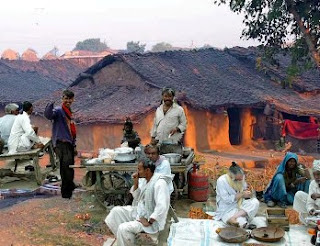 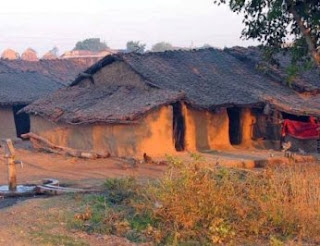 And now for a brief commercial break...

My Third Eye Itches has been honored by Grounding Thru the Sit Bones and Yoga Pulse as one of their 10 most liked blogs. Thanks guys. Here is my list...

Grounding Thru the Sit Bones

Diary of a Bad Buddhist


...Now back to our regularly scheduled program....
Posted by Yogadawg at 9:57 AM

Background - This pose came about by the excellent rendition of the Brahma Bull that YogaDawg saw Britney Spears performing for the Paparazzi. YogaDawg was so impressed with this advanced variation that Britney was doing that he decided to add it to his SuperDuperBlissInducer Super Bok Choy Method ®.

Pose - Same as the Brahma Bull but this advance variation will have you using Yoga props to use as Brahma horns during the execution of this pose. Don’t forget to breathe and smile for the cameras. 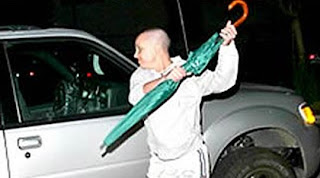 Background - Developed by MadDawg, one of the two disciples of YogaDawg and the handsome husband of HotDawg. This is homage to the feminine, the Ma or Mother, as wife and bearer of the hardships of afternoon Yoga classes and shopping. As chores and beer cans piled up, money gambled away and jobs were lost, the Yogi was inspired by his observation of others of the male species and incorporated that insight into this Yoga pose.

Pose - The teacher will start with a line of philosophically based questioning such as, "When are you going to cut the lawn" or "When are you going to look for a job." "When are you going to turn the TV off and get off the damn couch" or maybe even the daunting, "What the f*#*% is your problem you lazy SOB?" As you ponder these questions, you will give a blank and passive look at the teacher. You might chant the mantra, "Soon dear" or "I already did," or maybe even "I'm going to play cards at the bar with Fred and the guys." Your challenge will be to remain absolutely passive as you repeat these mantras. The advance version of this pose will have you lying down on your mat as you snore serenely. Don't forget to breath.

Benefits - This will find you serene in even the most stressful of situations. Said to be highly effective in divorce court and when dealing with your wife's divorce lawyer. 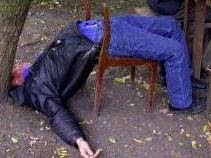