The Yoga world is buzzing today with an announcement from the Yoga Research and Development Organization (YRDO), a wing of the Ministry of Yoga under the Government of India, to officially declare and recognize the discovery of the Eighth Chakra. This discovery has propelled India's Yoga research once again to the forefront of the Yoga world. "We realize that we have been losing ground in Yoga to the United States in the last few years, but this should prove that all those American Yoga Stars are nothing but light-weights by comparison to what we are doing here in India, quipped Pasad Gurose, Director of YRDO.

Intense research work, done day and night for nearly 9 years by the senior scientist, Dr. M.A. Padma Rao, at the Yoga Laboratory in Jodhpur led to this Chakra discovery.

Long believed that there were only seven Chakras or virtual bodies as they are known in the Yoga world, reporters asked Dr. Rao how the new Chakra had been missed for so long. "Well, it's like astrophysics, we have developed tools to allow us to see deeper in the metaphysical body." When asked where this new Chakra was located Dr. Rao pointed to his foot and said, "The sole of the foot. It was literally under our feet this whole time."

The new Chakra has been named Pluto in honor of the ex-planet Pluto. "We feel that this is an appropriate name since even though we lost the planet Pluto, we have gained the Chakra Pluto," Dr. Rao added. 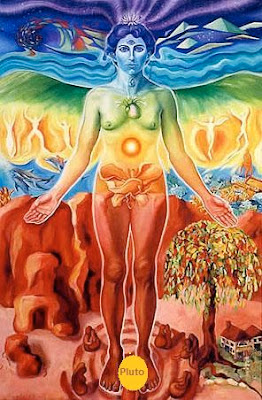