With the news last month that Britney Spears shaved her head because of a satirical news article on a Yoga humor blog, "My Third Eye Itches" (see Britney Does YogaDawg), there were further revelations today that Britney actually applied to become a disciple of Guru Sri Sri Baba Swami YogaDawg.

When reached for comment regarding this development, HotDawg, the lovely wife of MadDawg (formally Born and Maiden America) acknowledged that Britney was in contact with the non-profit YogaDawg Foundation. It appears that Britney sent a handwritten letter to YogaDawg requesting several YogaDawg t-shirts and explaining how she qualified (see Qualifications for buying YogaDawg Gear) to purchase them. In a PostScript to the letter, Britney wrote that she wanted to become a disciple of YogaDawg (Editors Note: MadDawg and HotDawg are currently the only two disciples).

As MadDawg explained, "We were kind of blown away that not only did she want to buy some YogaDawg t-shirts, but that she wanted to become a YogaDawg disciple". "Yeah, like we had her name picked out and everything", HotDawg added. When asked what that name was, they said, "CrazyDawg! We thought the name was perfect for Britney".

In the meantime, this reporter contacted Tom Cruise by phone with these further revelations regarding Britney and his reply was at first a stunned silence. Then he started shouting, "I want a YogaDawg t-shirt!" which at the same time sounded like someone was jumping up and down on a bed on the other end of the line. 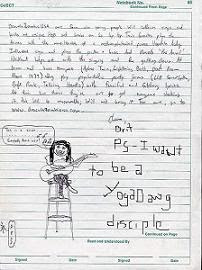 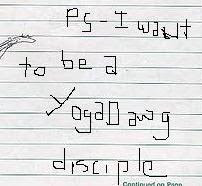 Yogis are flocking to a McDonalds in Gering, Nebraska where Patanjali is said to have appeared to people.

The apparition is taking place above the checkout counter of the restaurant. Yogis say that Pantanjili has been appearing to them on a regular basis over the past six months. Yogini, Rita Gomez, who is part of the ever growing group of Yogis that has encamped in the restaurant, said, "The vision usually begins when handed the McDonald bag that had a women doing the Tree pose on it. When they look up above the menu, they say Pantanjali appears and speaks to them."

After Patanjali spoke to one 14-year-old girl, she began and completed the entire Secondary Series (a series of poses done in the Ashtanga style of Yoga). Yogi, Emmanuel Duchamp, 38, said he saw Patanjali appear. When asked what he spoke about, Mr. Duchamp said “Super size that".

The Yogis have been doing asanas in the back of the restaurant during normal business hour. John Mattins, manager of the restaurant, when asked if this was a bit strange, he agreed it was odd but as long as they purchased something, he was okay with it. He added, "They are just a group of devoted Yogis who come here each day to do their thing. There has never been any other strange business going on that has ever given us cause for concern. We are keeping an open mind”.

It is reported that there have been no other sightings of Patanjali in any other McDonalds. 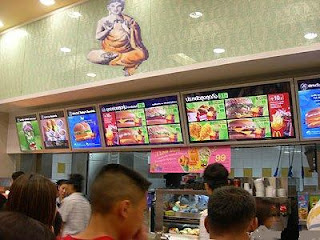 The bag that has inspired Patanjali to appear at a fast food restaurant.
Posted by Yogadawg at 3:27 AM

The Yoga world stands stunned today as Stanley Zambowski of Pittsburgh, Pa has made a move to copyright and trademark the word OM.

Inspired by Bikram Choudhury's successful copyright of 26 poses of Yoga, Mr. Zambowski hired his cousin Walenty Zambowski, a lawyer, who set loose a flurry of cease-and-desist letters warning yoga studios around the world not to use the word OM, the symbol Om nor even chant OM. "This is a cold and quiet day for all Yoga studios", lamented Rod Entriteramen of the NirvanaPranaOneWorldYoga Studios. "We actually had a few students break down crying because we had removed the OM symbols from the walls of the studio and sat silently before and after class since we couldn't chant OM and didn't know what else to do".

In the meantime, a nonprofit organization of yoga scholars based in India, in response, has put an additional 1,000 historians and scientists to continue to work cataloging all known Sanskrit words to block Mr. Zambowski from cornering the market on any other Yoga related word.

When questioned by reporters if he could possibly think he would be able to copyright the word OM, Zambowski (in the manner of Bikram Choudhury ) grabs his crotch, lets out a loud belch and thrusts wildly while screaming, "I am a Polish Bull! Boom! Boom!" Mr. Zambowski refused further comment.

Editor's Note: Mr. Stanley Zambowski is the owner of the famous Stan's Polish Sausage Hut and the Hot Polish Sausage Yoga Studio; both popular hangouts for students from the University of Pittsburgh.
Posted by Yogadawg at 2:16 PM

An exciting milestone in the Yoga world has been reached today with the 10,000th Yoga style registered through the Association of Yoga Styles and Schools (AYSS).

“We could hardly believe it when we received the application to register this latest Yoga style”, remarked Joan Sutherland from AYSS. “Who would have thought that so many styles of Yoga would appear? It seems only a couple of years ago that there were a few, such as Iyengar, Ashtanga, Anusara, Kundalini and a handful of others”, she noted.

AYSS, founded in 2004, was the brain child of Lou Stelutti, a New York Yogi and Jazz bassist. As Mr. Stelutti explained, “I noticed that with all the teacher training courses, there were not enough Yoga studios to hire them all. It was about this time that I suggested that these budding teachers establish their own schools of Yoga. It was with my sincere desire to help them in their Yoga journey that I established AYSS”.

When asked if these new teachers have benefited from registering at AYSS ($1,750 registration fee), Mt. Stelutti only smiled as he looked at his Rolex watch and exclaimed, “Whelp, I got to run. I'm late for my Yoga class”.
Posted by Yogadawg at 3:10 PM