With the increase of people participating in the practice of Yoga, there has been a rise in the incidents of what is known as Kundalini Blockage. Symptoms of this condition include: sudden jitters, feelings of vertigo, foaming from the mouth, objects leaping off shelves or lights turning themselves on and off around the Yogi, a sudden lack of interest in shopping or even an urge to become an artist.

In the past, getting the Kundalini unblocked usually required much time and energy, usually spent in extended periods of time and great expense, in ashrams in India with famous Indian gurus. Now though, through the innovations of one Yoga studio in Washington, DC, the Kundalini can be unblocked or even removed in about an hour.

As explained by Kimberley of the Pinkdoor Places Yoga studio, “Kundalini Blockage happens when the energy in the root chakra, awakened by meditation or Yoga or even extreme bouts of shopping for Yoga clothing or Yoga mats at the GreatTranscendentalYoga SuperStore, is trying to move upward and encounters a block; often in the sacral or solar chakra. It grounds itself through the legs until the block above is released”. With that insight, Kimberly has perfected several techniques to wrestle the Kundalini from the junction of the 4 and 5 chakra. She will either sweet talk it (“Now doll, you know how fab you would look if you weren’t feeling so trapped and crawling around people’s spines”), try to sell it something from the Pinkdoor Places Yoga Boutique (“You would look darling in the new fav Pinkdoor Places Yoga Unitard”), threaten it (“Okay bitch, don’t make me have to go in there and lip-gloss you”) or finally beat it into submission while removing it completly from the Yogi if it is practically stubborn.

When asked what happens when the Kundalini is completely removed, Kimberly replied, “Oh, not much really. The Yogis just kind of start acting like the rest of the zoned out Gen X and Ys that tend to show up for my Yoga classes”.

A Yoga teacher extracting Kundalini from a Yoga student at the Pinkdoor Places Yoga studio. 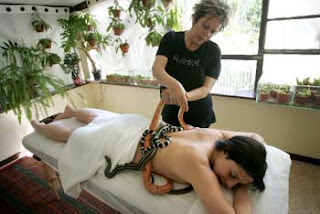