Upon release of the prestigious Yoga eBook My Third Eye Itches - A Yogic Guide award, the non-profit YogaDawg Foundation reports that revenues have soared. “Dang, we actually sold our first two eBooks on the same day”, commented MadDawg, the huband of HotDawg (formally Born and Maiden America) who are the two disciples of Guru YogaDawg. When asked how much revenue was made, MadDawg replied, “Six dollars and 26 cents ”.

MadDawg said that the two YogaDawg eBooks were shipped to the Jivamukti Yoga studio in New York. “We are pretty sure they are for David Life and Sharon Gannon as they had the name of John and Jane Yoga on the shipping label. Obviously proxy buyers for those two.” When asked why the founders of Jivamukti Yoga would want to buy the YogaDawg eBooks (since they have written several Yoga books of their own), MadDawg replied, “Well, it’s pretty obvious that the highfalutin Jivamukti Yoga juggernaut is feeling threatened by the spiritual and advanced nature of the YogaDawg eBook and are assessing the danger they present by examining the real deal.” He added, “It’s like Bill Gates buying up smaller software companies that he deems a threat to his empire”. “Oh”, said this reporter.

When asked how the YogaDawg Foundation was going to apply the revenue to further its mission, HotDawg, the lovely wife of MadDawg, replied, “Well, we haven’t decided yet. Let’s just say that for now we have been enjoying a better brand of dog food”. 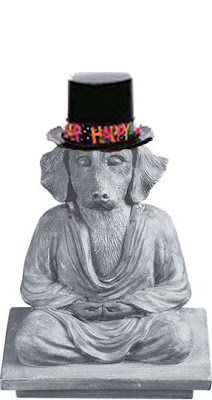