With the popularity and saturation of Yoga among the general public, Yoga teachers have become increasingly hard pressed to find new avenues of revenue derived from their Yoga practice. However, one enterprising Yogi found a way out of this dilemma. He has started to teach Yoga to cows.

While this has raised some eyebrows in the straight-laced communities of Montana where he teaches his Yoga practice, many cattle ranchers swear by the benefits of it. "My cows are so much calmer now", explained Guy Gusterson, a rancher in Custer county, Montana. "They seem to moo less which is a great blessing to anyone who lives on a ranch. Those cows can drive you crazy with all that mooing", he continued. "I think Yoga makes them more circumspect", he added.

YogaDawg, the brains behind Cow Yoga, claims his success comes from personally concentrating on each cow and telling them that they are doing a good job while at the same time letting them know if they need to improve a little bit here or there. YogaDawg is said to have a real personal touch with the cows. He realizes that each cow has their own skill level that they can work at and makes sure they never felt to be under pressure while learning Yoga.

"YogaDawg is just such a great guy, his vibes are amazing. Cows are kind of just naturally drawn to him', mentioned Wilma Gorden, another Montana cattle rancher. "You know when we first heard about Cow Yoga, we thought is was kind of nuts. After all, cows are kind of stiff", she explained. "But YogaDawg is very good with cows and makes them feel comfortable. He encourages them to just come as they are, gets their energy flowing", she added

YogaDawg explained how he came up with the idea of Cow Yoga, "Well, it was during a Cow Face (Gomukhasana) pose that I was doing when it suddenly dawned on me how stressed some cows are. Between cow mutilations from illegal aliens (the exterterrestrial kind), cow tipping (bored farm boys in rural areas who sneak up on an upright sleeping cow and then push it over for amusement) and lonely cowboys, it was obvious that cows could benefit from Yoga just as much as people". When asked what the hardest part was about teaching cows Yoga was, he replied, "Asking them to stop chewing their cud during class". 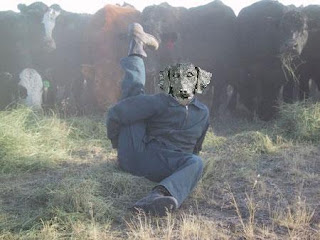 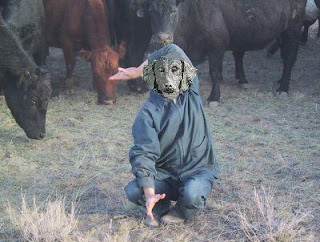