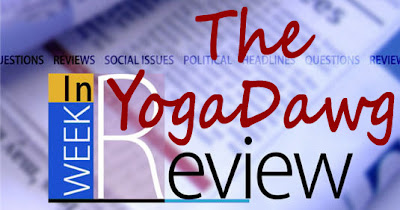 The latest YogaBoy cartoon - This is a masterpiece

Follow YogaDawg to his latest yoga studio prowl - Too hot to handle!

YogaDawg meets YogaBitch - Yes, it's true. She is awesome and funny.

Extraterrestrials Do Yoga - From the YogaDawg Archives - They're bad and they're back. Check out the YogaDawg crop circle.

Yoga Morons Pose All Over NYC Subway Car, Make Homeless ‘Joke’ - This is all over the web with the consensus being this is kind of douchy...


Other yoga things mentioned in the yog-o-web:

YogaDawg gets mentioned in a post on Yoga Modern

Top 10 Reasons Why Drinking is the New Yoga - This make me smile.

The Irony of Yoga Fashion and Its Gusseted Crotch of Higher Consciousness - The best yoga post title of the month and a funny read.

Socializing with Students – To Brunch or Not to Brunch? - All kinds of ramifications that even I have had to deal with.

Great interview with Yoga Bitch - “So I simply can’t keep it together when my placid-faced yoga mates start honking at each other like Ganesha the elephant god."

And the best yoga pic of the week: