Yoga Career - The Missing Chapter from My Third Eye Itches

If there are heroes in the yoga world, they are the unknown yoga teachers working in small local yoga studios in hometown America. These are the true yoga warriors who work for next to nothing and still manage to spread a smile and a helping hand to yoga students everywhere. This is dedicated to those teachers who show up for class everyday without glitz or pimping for fame to simply teach yoga.

Now that you have gained an awesome amount of yoga knowledge from studying the famous yoga guide, My Third Eye Itches, you are perhaps wondering how you can make a career from your new yoga passion. A quick look at any yoga studio web site will reveal teacher training programs geared towards aspiring yoga careerists such as you. These teacher training programs, known as TTPs, churns out thousands of yoga teachers every month earning 200 hr certificates, 500 watt yoga smiles and high hopes for a yoga career. After spending thousands of dollars for such training and cocooned in the nurturing kula of ambitious, like-minded yogis such as yourself, things could not look brighter as you salivate on the endless possibilities of cashing in on the yoga boom. Unfortunately, it is only after completing your training and having entered the yoga work world for the first time, are you quickly confronted with the ‘yogic wall of truth’; that there are few paying jobs teaching yoga. It is during this time of futile searching that you find yourself teaching for free in donation classes (also known as community classes) in hole-in-the-wall yoga studios (for experience) and church basements (for Seva). It is only after months of payless teaching and the endless quest for that elusive paying yoga job do you realize that the true monetary value of your teaching certificate ain’t worth bupkis.

By entering a TTP, you knew your yoga aspirations and intentions were pure; to teach the One True Yoga to adoring students in various upscale yoga venues and in return, to forge a yoga career and make enough money to support yourself and your fourteen feral cats. Unfortunately, once you are no longer tucked serenely in the protective womb of your yoga teacher training mother-ship (the trendy and expensive yoga studio where you took your training and where you hoped to work one day) at the completion of your TTP are you confronted by the presence of a totally new reality; that yoga is financially indifferent to new yoga teachers. What seemed to have been missing from the training material is the fact that only .00000011% of TTP graduates will manage to make a living from yoga and only after years of bottom feeding in the seemingly bountiful yoga ocean as viewed from the self-serving summit of Yoga Journal.

With yoga studios pumping out more people who teach yoga then people willing to pay to learn yoga, the economic pie begins to look very small indeed. There are simply not enough Yogos (international yoga currency) to go around. As a result, the competition for yoga economic crumbs is brutal and is the unspoken 500 lb Hanuman lurking in the yoga studio system. With studio politics, mindful maneuvering and sheer luck (and often good looks, good hair and youth), those that do manage to survive the relentless competition to rise to top of the yoga teacher food chain will only then get a rare chance for a try at grabbing the golden ring of the Yoga-Industrial-Complex; that of becoming a Yoga Star (those purveyors of endless yoga DVDs, books, workshops, clothing endorsements and the coveted new yoga style named after themselves).

But don’t lose hope at the seemingly impossible task of making a yoga living. Remember, when faced with complete defeat of ever finding a paying yoga teaching position with the resulting deflation of your self-esteem and self-worth, be aware and rest assured that you can always sign up for the 500 hr teacher training program at the hot, new studio down the block. Sometimes, delusions are your best defense.

Now we will examine the stages you will pass through on your journey as a yoga teacher once you get your awesome new teacher training certificate... 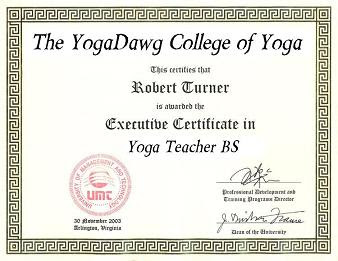 To be continued
Posted by Yogadawg at 1:01 AM