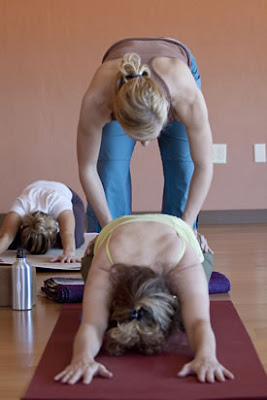 Stage 2 - Novice – Novices are the hip yoga teacher in the yoga community, both admired and emulated by their students. Their classes are heavily peppered with yoga-speak and Sanskrit while they spout spiritually uplifting but somewhat incomprehensible or confusing theories about yoga. This is understandable as they are drunk with yoga shakti. Novices thrive in second tier yoga studios where they receive a pittance to teach an ever growing following of adoring students. They move frequently from yoga studio to yoga studio endlessly substituting for more established teachers in the hope that they too, one day, will land well paying yoga classes in a top end studio.

Although they are working yogis (though quite removed from the Yoga Stars who live in a separate alternate yogic universe), they fund their yoga passion by living a simple and streamlined lifestyle out of economic necessity. Novices tend to live their lives as modern-day hippies, free spirits dancing to tunes of the transcendental yoga that only they seem to hear clearly. The Novice will eat only out of necessity (but always local, sustainable, eco friendly, free range and shade grown) seemingly nourished by the yoga they love. They literally seem to live on the very prana they breathe. Though always on the edge of financial desolation, the Novice mindfully begins to stake their place in the hierarchical yoga world. Though they know that there is no perfect solution to the economic ‘Yoga Problem’, they will nonetheless manage to manifest enough resources to seek more yoga knowledge by attending advanced yoga workshops and trips to India in search for perfection of the ultimate advanced yoga asana. They have a guarded hope that by doing so; it will bring them closer to the yoga career and ultimate abundance they desire.