Let the Mat Wars (and jokes) begin. With six inches wider than a normal mat, I wonder how many people are going to be unyogic (pissed off) as their precious space between yoga mats is being gobbled up by the John Friend Phat Mat. In some studios in the Federal City, there are taped spaces where you are suppose to put your mat so they can cram, ahumm, I mean maximize the available space for as many students as possible. I don’t see this as an issue in your own space or sparsely populated studios but I can already see the stink eyes starting as a someone rolls this out. So why stop at 30 inches?

Some great comments are already rolling in (come on, some of this shit is pretty funny):

"...are you going to be the one who shows up for a packed class with a gigantic mat, bigger than everyone else's? Who wants that reputation?"

"I'm going to﻿ take all 5 of my Manduaka Mats and roll them over your mats. And I'm going to swipe your water bottle."

But heck with that mat, I'm bringing one of these babies with me to my next class... 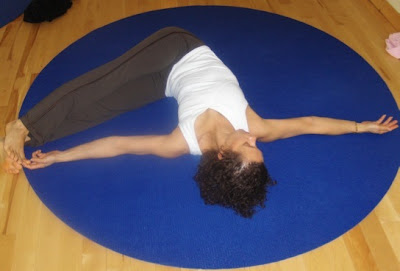 Better yet, look for the YogaDawg Double-Wide Yoga Mat tm (at twice the size of the normal mat) ...