Ryan Gosling brought his bad dog to yoga class, where it peed in the corner

Ha ha ha, that dog must be a YogaDawg 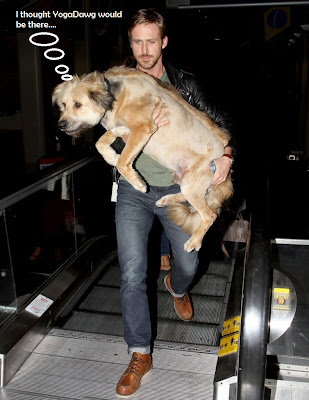 "Ryan Gosling has been causing a ruckus in his West Hollywood yoga class by bringing along his beloved pooch George - who interrupts workouts by pestering people, barking and even marking his territory!"

“Ryan is a great guy and everyone in class loves him, but they find it very disrespectful that he brings his dog,” revealed a gym insider. “Ryan put a mat next to him and attempted to get George to stay on it. But it only took about 30 seconds before George began walking around and disturbing people who were trying to concentrate on their workouts.

“The instructor finally asked Ryan to remove George from the room after the dog began relieving himself in the corner!”…

The worst part about the yoga fiasco, said the insider, is that…

“He actually tried to bring him to class again,” added the insider. “The instructor immediately told him George was not allowed back in class!”

From The National Enquirer, print edition, October 7, 2011
Posted by Yogadawg at 6:50 PM