Become The Next Great American Yogi. The new yoga reality show, Bend That Back, pits unknown yogis against each other for a chance at yoga domination. Judged by famous American Yoga Stars, the yogis will participate each week in unique yoga challenges. 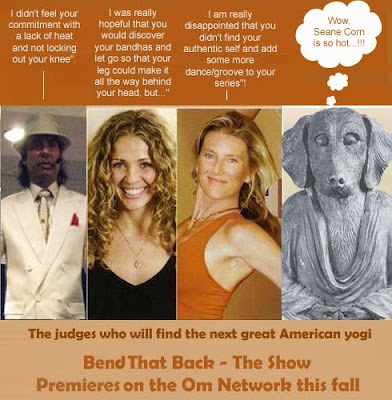 Straight from the mat – From a sadhu’s alms bucket, each yogi draws three slips of paper which has a yoga style by a well known yoga star scribbled on it. The challenge it to create a new style of yoga using a blend of only those three styles. Extra points are awarded for novel uses of yoga props.


I am the most serene – This challenge pits the yogis against each other to see who can hold corpse pose the longest without snoring or get up to use the loo.


I’m too sexy for my yoga – This competition will see who can buy the sexiest high end yoga togs for the least amount of money. Really, really tight fitting and skimpy outfits are encouraged for the aesthetic portion of this challenge.


Extreme yoga video - A yoga mat is laid out with the following: a copy of the Upanishads in the original Sanskrit, a cobra fang, a Tibetan prayer bowl, the latest issue of Yoga Journal, a framed letter from Pattabhi Jois, a calendar showing yoga poses done in the nude (in black and white), a tattered poster from a Jimi Hendrix concert from 1969, a pair of Toesox, a bottle of kombucha and a tube of hemorrhoid cream. Each yogi must use at least two of these items to do a 15-minute yoga performance, of which at least five minutes must contain gratuitous nudity.


Talking shit to the Godhead – The yogi reaches deep into their vast yogic experience and teacher training to out-talk their fellow yogis with yoga speak. Points are rewarded for the most inane, incomprehensible and the most riddled with cliché. Talking in tongues for short periods will be allowed. Extra points are given to contestants that can put any of the judges to sleep or cause their eyes to glaze over.


Yoga studio limitations - The challenge here is to find clever new ways to disturb a yoga class. Loud ujjayi breathing, tight, revealing clothing and/or doing different poses then everyone else in class have all been used successfully in the past. Creativity is important in this challenge


Yoga YouTube nation - Using a cheap video camera, the yogis will produce a YouTube video of their most advanced yoga moves. After posting the video online, the yogi with the most hits after a week wins.


Sweating to the yogis – Yogis attempt to follow a 2 hour instructional yoga DVD in a hot yoga room that starts out at 86 degrees. Heat increases a degree every minute. Last yoga standing wins. Extra points are awarded to any yogi that keels over from heat stroke or who suffers third degree burns. Any yogi that dies during this challenge will be automatically disqualified.


Rebel yoga yell – With the rise of claims by some young yoga stars who have labeled themselves yoga rebels, this challenge will find the yogis in a competition as to who can create the loudest and most sustained rebel yell. Extra points for those that can do so with a southern accent.


Outsourced yoga - Yogis have five days to set up a website that offers online yoga classes with outsourced Indian programmers and Indian yogis to work for as little as possible. The winner is the one who can hire the cheapest programmers and yogis with points awarded for any web site that can actually get someone to pay for these classes.


Authentic Self dance trance groove - Following the contemporary yoga tradition in which yogis choreograph a highly produced yoga dance routine, this challenge asks the yogis to create their own original dance trance production. The participant that gets closest to their authentic self during the allotted time wins the challenge.


This asana is for the dawgs – This challenge will require the yogi to use a real animal in an animal-named yoga pose. The first yogi who can gets PETA to protest the abuse of animals against the yogi, wins.

Cosmic colon cleanse - Using a special formula of kombucha, gogi berry extract, a secret blend of ayurvedic herbs and blessed by a tribe of Tibetan shamans, the first yogi that completely dissolves their ego, ambitions and false face wins. Additional points awarded for any yogi that levitates to a height of at least 8 inches over the toilet seat for a period of no less than 3 seconds on the initial, ahumm, blast.

YogaDawg Production is now accepting applications to appear on "Bend That Back". We are looking for 12 participants who fit the yoga demographics (as defined by Yoga Journal) - 9, size 0 or smaller white women between the age of 20 and 27, 1 male, 1 minority and one really, really old person (like around 40). Send a letter of intent (and if you are female, a photo of you doing a yoga pose naked) and $350 for processing to:

A big thanks and shout out to the lovely and inspirational Alex for the yoga star quotes and the ideas we batted around months ago about a yoga reality show. It's funny how a bleak, barren and boring time at work brings out the satirical in me.
Posted by Yogadawg at 1:23 AM