In what appears as a celebrity world going mad (or at least bald), Tom Cruise is the latest star to shave his head (see Britney Does YogaDawg). Appearing on the NBC's Today Show, Cruise explained why he shaved his head to Matt Lauer.

“I couldn’t understand why Britney was able to buy a YogaDawg t-shirt and yet I’m not able to. It occurred to me that this might be a Cosmic test for me and concluded that I had to shave my head”, Mr. Cruise explained. Matt Lauer said that the t-shirt he was wearing looks like a cheap knock-off and not a real YogaDawg t-shirt. Flummoxed, Cruise replied, “Of course, it real, do you know how much money I had to send the Dawg to get this. And just trying to understand those people at YogaDawg Productions in Nigeria was a nightmare. All I can say is, just thinking about this make me way to start jumping up and down”. Mr. Lauer was quick to reply, “Please don’t…”

Mr. Cruise was asked if shaving his head might hurt his chances of landing future movie deals. He replied, “No! As a matter of fact, I am in talks with the producer of the “The One True Yoga” (see The One True Yoga) to play in the sequel The One True Yoga II as the Court Jester”.

When the non-profit YogaDawg Foundation was contacted for this story, they at first were quite stunned that Tom Cruise had somehow gotten a hold of a YogaDawg t-shirt (see Qualifications for Purchasing YogaDawg Gear). MadDawg, the handsome husband of HotDawg (formally Born and Maiden America, the two disciples of YogaDawg) declared that the shirt Tom was wearing was in fact, fake. “We had NBC send us close-up of the shirt and saw that it is clearly a fake. We feel bad for Tom, but we still won’t sell him a t-shirt”, MadDawg said. HotDawg added, “But you know, he is kind of cute, especially with all that jumping up and down he does. He kind of looks like he’s doing Ashtanga Yoga sometimes. I think he can become a great Yogi if he ever decides to become a disciple of YogaDawg”!

Tom Cruise (wearing a YogaDawg t-shirt) explaning why he shaved his head to Matt Lauer with close up of the t-shirt in question. Notice the crude lettering, the smiley face on the Dawg and the incorrect website on the shirt in this close up 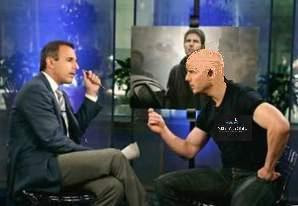