YogaDawg Movie - The One True Yoga

(With all the hand-wringing on the yoganet over the issue of what is or is not yoga, I couldn't help but to think of this piece done a couple of years ago, updated to add President Obama. I have to say that the more I hang out in the yogawebs, the dirtier I feel. And here I thought we were all just having some fun...yuck...)

Helped by legions of yogis, YogaDawg's Yoga action movie, "The One True Yoga" rose to top the weekend's domestic box office among plenty of competition. The picture took in $18.9 million in 3,465 engagements for a per-screen average of $7,747.

That was enough to edge out Mel Gibson's "Apocalypto" which opened at No. 2 with $16.1 million from 2,678 playdates. "The One True Yoga" dug into "Apocalypto's" shimmer as both pictures aimed to draw primarily male audiences. But "The One True Yoga" won the weekend by also bringing in an amazing amount of yoginis (female practitioners of yoga) as word of mouth about this yoga movie made its way through Yoga studios around the world with the word that YogaDawg, himself, would be appearing in the film.

"We see this as the blog conversation or water-cooler conversation of the week," said YogaDawg distribution head Carlson Venuten of the picture's crossover appeal. "This film is so creative, so fresh and different. There's so much competition that in this marketplace you have to delineate yourself".

Starring Ana Forrest as the Temptress, BKS Iyengar as the King, Ana Brett as the Exotic Virgin, Bikrum Choudary as the Court Jester (Rodney Yee was the original choice for Court Jester but it was decided that he would have trouble transitioning between the small screen of Yoga videos to the big screen) and YogaDawg himself as the Wandering Student Yogi, this film chronicles the journey of a new student of Yoga through the wily world of Yoga Schools and studios. Fighting hypocrisy and rampant commercialism of the Yoga world, YogaDawg fights pitched battles with the founders of Yoga schools, Yoga Zealots and 200 hour teacher trained Yoga Teachers. YogaDawg eventually triumphs in the discovery of the One True Yoga as he ascends the highest peak of the Himalayas and throws down the tablets of the false Yogas.

Makes me want to do yoga... President Obama

The character of the King was really funny... Geeta Iyengar

I want to be a Yoga Movie Star!!! Rodney Yee

Shut up Rodney and go into child's pose...Colleen Saidman 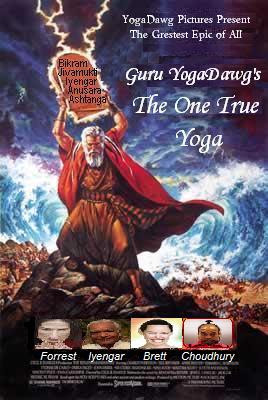