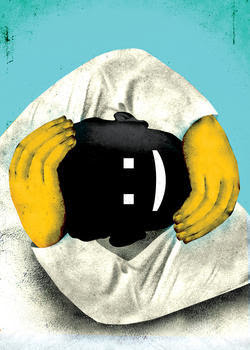 I featured Michael Stusser in the past because when I started My Third Eye Itches, there were only a couple of people doing yoga humor. It's funny to see new yoga bloggers trying to attempt this but I always think how great Michael's writing really was considering so few were doing this. Here is his latest piece as he explains, "My new article is about attempting to Speak (and Tweet) No Evil for an entire month during my divorce - no lies, gossip, foul-language or terrible tweeting of any kind...In attempting to do so, I recruit a team of advisors including my wise and wonderful yoga teacher."

His other two pieces: Yoga-Phobic Tendencies and Bikram Yoga Trials
Posted by Yogadawg at 1:39 AM