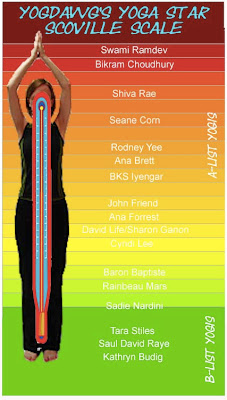 The YogaDawg Yoga Star Marketing Research Division of the non-profit YogadDawg Foundation tracks how yoga stars have been gaining or receding in influence in the yoga world over the last 12 months (October through October). This highly influential study has become invaluable in the yoga community to plot the yoga stars rise and fall in popularity and their current position relative to each other on an easy to understand color-coded scale.

The Yoga Star Scoville Scale registered movement during this period with the dividing line between the top and bottom halves of star popularity continuing to widen. The top spot is now occupied by Swami Ramdev with his “cure for everything” yoga and the purchase of a yoga island off the coast of Scotland. His legions of new followers have propelled him to “Top Yoga Dawg”. The former “Top Yoga Dawg”, Bikram Choudhury meanwhile has slipped down to second place due to a lack of memorable quotes from him or a major scandal during this period. He did however cushion his fall somewhat by snubbing Madonna in her request to him to become her personal yoga trainer.

Most surprising during this period were the actions of three B-list yogis, Tara Stiles, Sadie Nardini and Rainbeau Mars. In a breakout gambit to enter A-list territory, these three yogis decided to take on yoga blogger malcontents by commenting on their posts. Slogging their way into the snarky yoga blogosphere, we found Rainbeau Mars to be a brawler as she duked her way back into the the fray, time and time again, even after seemingly being pummeled by whiny yoga practitioners (quite frankly we thought she would have “floated like a butterfly and stung like a bee”).

Meanwhile Sadie Nardini fought off the bloggers with an intellectual game as she sidestepped and deflected their pointed cynical barbs with mental manipulations, occasional flights of fancy and bouts of ego. Tara Stiles on the other hand seemed content to take on the bloggers by simply shaking her booty at them.

We feel confident that Rainbeau has now entered solid Yoga Star A-List territory while Sadie straddles the A-line/B-line and is too close to call for us. Our bets though are that Sadie will be the break out yogi, joining the A-list sometime next year (along with Saul David Raye who now has a serious dot thing going on and Kathryn Budig who is…well, HOT).

Aligned perfectly in the middle of the Yoga Star Scoville Scale, as has been the case for the last 5 years, is BKS Iyengar, holding solid as a mountain while Shiva Rae continues to move up with her ubiquitous presence in yoga ads, videos and her Yoga Mala strategy (we thought this was brilliant for her brand recognition). The always cheerful Rodney Yee on the other hand has be sinking down the scale due to lack of activity in his video enterprises. What is not clear is if Colleen Saidman is dragging down ‘The Rod’ at this point . We are glad to report that he did manage to slow some of his downward slide with his brilliantly commercial, Gaiam Yoga Club.

The always lovely Seane Corn continues to rise like a purified lotus blossom as she pursues her good works of yoga causes along with her ever present, effervescent personality and the refusal to cut her hair. We are looking forward to all the swag that Seane’s publisher will be sending us with this spot-on analysis of Seane… (hint, hint)…

Sadly, Baron Baptiste continues to sink on the scale and is getting perilously close to the B-listers. We don’t quite understand why this has been happening but think the bandana thing has been played out and continues to be a drag on his inability to rise in rank. With no fresh ideas on the radar from Baron, our bet is that he will slip off the scale altogether sometime towards the end of next year or early 2011.

In contrast, Ana Brett has been shooting up the scale like a rocket, buoyed by her change of hair color (blond), introduction of ‘yoga boots’, the happy enthusiasm of male yoga practitioners and one obsessed fan in rural Georgia.


This study was funded by the non-profit YogaDawg Foundation with a grant from Doga Magazine and money stuffed in brown paper bags delivered by special yogic couriers to YogaDawg Headquarters in Lagos, Nigeria
Posted by Yogadawg at 12:54 AM