Anxious to consolidate its position within the American Yoga boom, Yoga Journal announced today the creation of a new School of Yoga; Twister Yoga.

With the intention of competing head to head with Jivamukti and Anusara, Twister Yoga is said to be the next logical evolution for Yoga in the U.S. “With all the new Schools of Yoga appearing almost daily (see 10,000th Yoga Style Reached), we felt it was time to create our own”, said Kaitlin Quistgaard, editor of Yoga Journal.

What makes this style of Yoga unique is that it is not practiced on Yoga mats but rather on Twister mats (These mats are found in a game called Twister). Using the profits from the wildly successful Yoga magazine, Yoga Journal bought both the rights to the game and the name Twister from Milton Bradley for $656 million dollars.

Twister Yoga is performed with up to 4 Yogis per Twister mat. Employing standard Yoga poses, this style requires the student to use a spinner that matches color dots on the mats. In turn, the yoga teacher will call out Yoga poses that the student will perform on that particular colored dot. It is said that things get really exciting with poses such as tripod head stand, side angle crane and happy baby.

When asked why they feel that this style of Yoga would be successful with so many other styles in existence, Ms. Quistqaard replied, “Well if truth be told, Yoga is kind of boring. I mean that Iyengar stuff would put anyone to sleep. We at Yoga Journal feel that we are making Yoga fun and exciting.” She added, "Also be aware that we intent to create other Schools of Yoga as opportunities present themselves, so we are sure we will be able to provide a School of Yoga for everyone".

Questioned whether Yoga Journal’s entry into the Yoga School arena would jeopardize their other income streams such as the Yoga conference business and magazine advertisements, she replied, “You might have a few cry babies out there that claim we are taking money from them, but most of the Yoga Stars know which side of the bread their Yoga success is buttered on”. 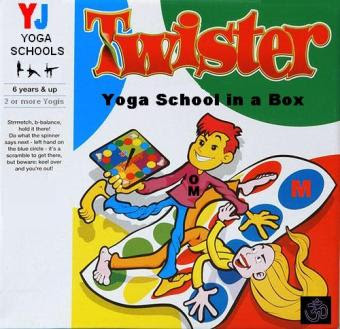 In another development, Lululemon will begin merchandising a line of Twister Yoga clothing that they plan to introduce with the launch of the new Twister Yoga style at the Yoga Journal Yoga Conference in San Francisco in September. 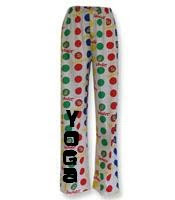 The new Lululemon Twister Yoga Pants
Posted by Yogadawg at 12:36 AM